2 Government Responses to the Challenge of STEM Education: Case Studies from Europe

16 Dec 2 Government Responses to the Challenge of STEM Education: Case Studies from Europe

Posted at 08:58h in Reports, Resources by kkatja
0 Likes 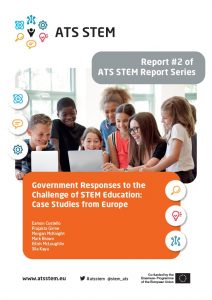 “In Europe, over the past decade our way of living, earning, and learning has been impacted by digital transformation. The transformative nature of new digital technologies is expected to continue over the next decade, particularly driven by developments in Artificial Intelligence (AI), with major implications for the future of work.”

This report was written as a part of a research project titled Assessment of Transversal Skills in STEM (ATS STEM) funded by Erasmus+. It is the second in a series of five reports based on deliverables related to the ATS STEM project, intended to draw on the first four reports and present an integrated conceptual framework for the assessment of transversal skills in STEM.

The aim of this report is to plot a common pathway for developing an integrated approach to STEM education. It endeavours to trace the policy landscape across the eight partner countries and map overlapping areas of interest. Intersecting areas of interest are key to formulating an integrated approach to teacher education and curriculum development where teachers may operate in very different contexts but may have similar digital tools and platforms available to them. A 2019 survey that investigated government responses to the challenges of developing STEM education was referred to.

This report first scans other selected relevant STEM education policies both inside and outside of Europe. Whilst some notable policies exist such as in Australia and the United States, these are not widespread and within Europe, as results of a search found that there is a dearth of published official Governmental policies on STEM education. A significant example, however, is the Scottish STEM education policy which has, in turn, influenced other European policy moves in this direction.

Given the lack of widespread published policies per country in Europe, the report details the development of a survey instrument to help capture more details about policy development in the European countries/regions that are partners in this project. This was distributed to experts drawn from the partnership in each country/region who responded with reference either to explicit published policies in their region or other Government-led initiatives in STEM education of which they were aware.

Four countries out of eight reported having a specific detailed framework or policy in place for STEM education. The survey also targeted the scope of the policy at different levels and six of the eight countries reported having a policy focus at pre-primary and post-primary level. The survey attempted to seek details focused on the development of transversal skills and initiatives in teacher development and continuous professional development (CPD). Every expert representing their country/region recognised the importance of identifying and teaching transversal skills in order to support the integration of STEM learning.

The report also highlights STEM policy and educational initiatives targeted at specific underrepresented groups. A segment detailing the role of industry in STEM education policy initiatives addresses partnerships across a diverse stakeholder group. It highlights the rich collaborative efforts to engage in partnerships focused on STEM education on the ground in the partner countries. The policies and initiatives in this report are both ongoing, in implementation, and also those in developmental stages and launched as recently as 2019.